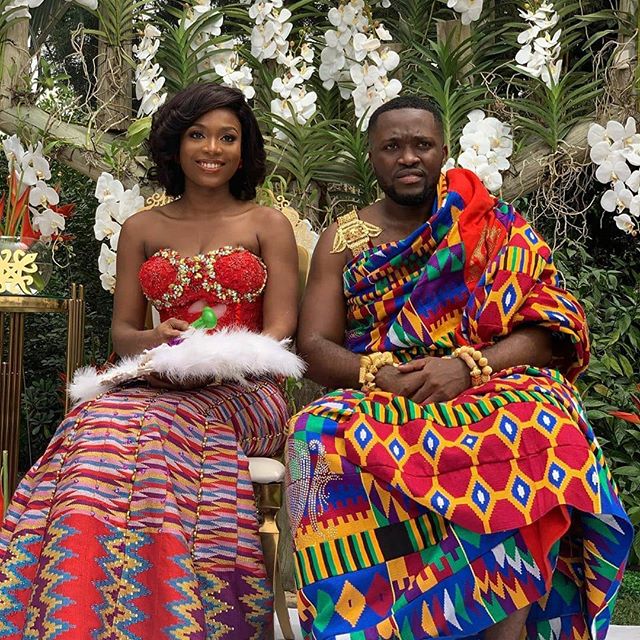 Traditional Marriage Of Despite’s Son And His girlfriend.

Kennedy Osei Asante the General manager of Despite Media and son of Ghanaian millionaire Osei Kwame Despite has tied the knot with his beautiful girlfriend Tracy.

The traditional marriage themed #KENCY2020 brought to light display of the beautiful Ghanaian kente with all the glitz and glamour at the Trassaco estate.

The bride, Tracey who is a fashion illustrator and designer designed her dress which was made by Pistis Gh.

The young man proposed to his girlfriend on a flight whiles they were returning from a friend’s wedding at Calabar in Nigerian, midway through the flight Kennedy pulled the romantic move on his girlfriend. Kennedy was given access to the flight’s mic by the Pilot and cabin crew on board, where he called out his girlfriend, asking her to be his wife.

“Hello everybody on this flight … the bible says when a man finds a wife he finds a good thing … at this moment I’d love to ask Tracy to formally grant me the opportunity to make her my wife ” he said.

Shocked Tracy said yes to him and he placed the ring on her finger with the passengers cheering them on.

Watch the proposal video below.

EXCLUSIVE: Kennedy Osei Asante proposes to his girlfriend Tracey on a plane. . A young man meets a beautiful Damsel at a wedding and is love struck, they become friends and what emerges is a beautiful relationship born out of love and mutual respect. Midway through a flight from a close pal’s wedding at Calabar in Nigerian, he proposes to his Queen in the presence of other close pals with the support of the Pilot and cabin Crew on board…Love Brewed in a true African pot!! #BecomingMrsOsei #KENCY2020 . Kennedy Osei is the son of Ghanaian Business Mogul, Dr. Dr. Osei Kwame Despite and he is currently the General Manager of Despite Media. . . . . . . . . #GhanaPaparazzi #AfricaPaparazzi #NkonkonsaCelebVideo #NkonkonsaExclusiveVideo #NkonkonsaCelebCouple #NkonkonsaCelebWedding #NkonkonsaVideo #Nkonkonsa #Ghana #Africa #Accra #celebrities