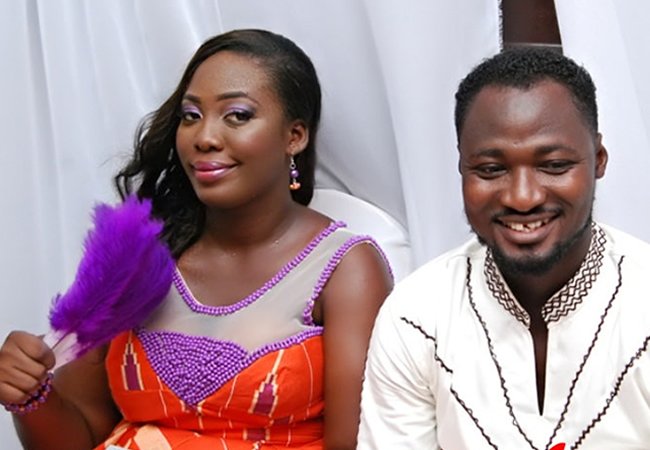 Funny Face Writes A Letter To His Ex Wife

Benson Nana Yaw Oduro Boateng popularly known as Funny Face said he has forgiven his ex wife Elizabeth Nana Adjoa Ntim after harbouring hatred and anger for her for years.

The two who got married in 2014 divorced two years after their marriage, throwing countless jabs at each other including Nana calling him a two minutes man and Fanny Face referring to the marriage as useless.

According to the Cow and Chicken producer he has now forgiven his ex wife for all she said to him during their divorce and also asked for forgiveness for all he also said about her.

A letter to my Ex wife … Hello NaNa Adwoa .. how u doin ? Hope all is well with u and da family .. well let me go straight to da point .. for some years now .. I have haboured soo much hatred and Anger towards you .. you have da least idea ! While praying dis dawn .. I felt it deep in my spirit … dat I have to do dis publicly .. from today Nana .. I FORGIVE YOU .. everything you said abt me during our fight .. everything I said abt u too .. pls FORGIVE ME .. let’s live peacefully on dis earth for da world we see today is passing away soo quickly .. TODAY WE ARE HERE .. TOMORROW WE GONE. .. deep within you I know if I die today .. u won’t be happy .. and vice verse ! Recently when we were shooting KASOA TROTRO tv series .. you saw me and u smiled .. I know even tho u won’t show it .. you are Happy dat things are moving on well with me now 🙏❤️. .. and the 2 minutes “ issue “ turned to twins 😝🥰❤️😃 .. GOD has blessed me in double fold NANA .. so from today I SET MY SELF FREE from any anger and rage .. dat has kept me in bondage … 🙏 and oh WIKIPEDIA pls update my bio now to my new Wife ❤️🙏🥰 I WISH YOU ALL DA BEST. NANA .. keep shinning 🙏 … my #ELLAandBELLA👯‍♀️ KASOA VANDAMME “ ei go over you “ #MrHappiness