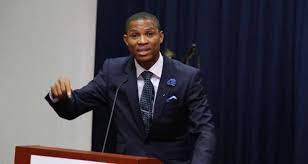 Former member of parliament for Tamale Central, Inusah Fuseini has argued that Francis Xavier Sosu, the MP for Madina, should have answered the court summons after performing his parliamentary obligations.

The National Democratic Congress(NDC) MP, Francis-Xavier Sosu was arrested on Monday by the Kaneshie District Court for unlawfully obstructing a public road and destroying public property but he refused to appear in court after being summoned.

But responding to the issue on 3FM’s Sunriese on Tuesday, hosted by Alfred Ocansey, Lawyer Fuseini stated that the court should be respected and every offence should be answered.
“You need to heed to an invitation of the court and answer to the offence that you have been alleged to have committed”.
According to Fuseini, the MP should have shown respect to the court by responding to the summons after he returned.

“By that time the case was called, he was outside the jurisdiction and it was legitimate reason to absent yourself but the lawyers should have advised him to appear before the court after returning but not to crosstalk with the court”.
“The authorities of the courts cannot be challenged that way because it is a serious matter within the eyes of the court. It is a contempt of court. If an accused person refuses to attend court on sermons, the next available option is contempt of court”, he added.