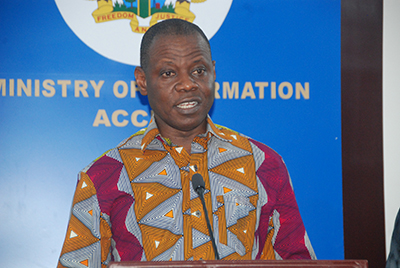 Dr Patrick Kuma-Aboagye, Director-General of the Ghana Health Service (GHS), has stated that the decrease in COVID-19 infections gives the government an opportunity to accelerate vaccinations to guarantee that more people are protected against any future increase in infections.
“There is a surge in the availability of vaccines and persons vaccinated are less likely to be hospitalised, so this is the time to vaccinate more people because that is the only way we can ensure that majority of the population are protected, ” he added.

He said this at the Minister’s Press Briefing, and also explained that over the previous three weeks, there has been a decrease in active and daily instances of COVID-19, as well as cases on admission in the three primary hotspot regions of Greater Accra, Ashanti, and Volta.

He stated that Ghana has received around 4.8 million doses of vaccinations through various arrangements to guarantee that the government met its goal of vaccinating 20 million people by the end of the year.

He stated that AstraZeneca received 65.70 percent of all vaccines received in the country, while Moderna received 25.21 percent. Johnson & Johnson and Sputnik-V accounted for 8.66 and 0.43 percent of the total.

As of September 26, this year, a little more than 1.6 million doses had been provided, according to Dr. Kuma-Aboagye. He stated that the administration was still working around the clock to get enough vaccines to meet its goal.

According to the director , the number of international visitors to the country who tested positive has also decreased. As of September 25th, 502,711 people had been tested at Accra’s Kotoka International Airport, with 2,789 of them testing positive, bringing the overall test positivity to 0.55 percent.

Approximately 61.9 percent of those who tested positive were males, whereas 50% of all positive patients at the KIA were non-Ghanaians. In terms of school infections, 461 schools have recorded instances of COVID-19, with a 98.8 percent recovery rate. The Volta Region has the most active cases among students in six areas, with zero cases in the North Eastern Region.