Home / Breaking / Group Tells Akuffo Addo: Operationalize The Newly Commissioned Upper Regional Hospital Before December 31, 2019, Or Face The Wrath of The People of The Region 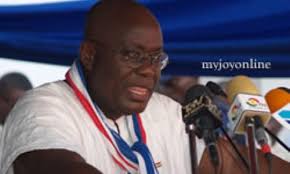 Group Tells Akuffo Addo: Operationalize The Newly Commissioned Upper Regional Hospital Before December 31, 2019, Or Face The Wrath of The People of The Region

The newly constructed Upper West Regional Hospital is one of the many life changing projects undertaken by the erstwhile Atta Mills – Mahama administration in the region. The 160-bed capacity Hospital if opened to the general public will carry the health delivery system of the region to another level with its modern facilities and equipment.  The Multi-million dollar and state-of-the-art facility that cost the tax payers over $52 million which was commissioned by His Excellency Nana Addo Dankwa Akuffo-Addo, President of the Republic of Ghana on August 18, 2019 amidst pomp and pageantry; for whatever reason unfortunately remain closed to the public.

Also, it is public knowledge that even the commissioning of the facility by the President did not itself come on a silver platter, but the concerned citizens of the UW region had to fight tooth and nail to bring that to fruition, though the intention was not just to prevail upon government to commission the hospital but also to open it for public use. ATAG vividly recalls on the 12th of June, 2019 the Upper West Regional Secretariat of the National Democratic Congress, its sympathizers and well-meaning citizens of the UW took to the streets of Wa to demand the inauguration of projects that were completed under the erstwhile Mahama administration. The demonstrators clad in red and black attire with red head and arm bands, did converge at the forecourt of the new regional hospital and also presented their petition to the President through the Upper West Regional Minister, Dr. Hafiz Bin Salih. Interestingly, the demonstrators held placards with varied inscriptions such as; “Mr. President, what has the people of Upper West Region done?”, “Deceptive government, stop being insensitive”, “Show us your competence, Nana Addo”, “Nana, stop fooling us! Kyebi road finished, Upper West Hospital stopped”, among others. The Regional Communications Officer of the NDC, who addressed the media on behalf of the group indicated that “the residents of the Upper West Region could not fathom why such a facility that would inure to the general wellbeing of the people would be left unutilized by a people who ‘have become stranded in their healthcare needs and have suffered several avoidable deaths due to their inability to garner the needed resources to access other referral centers outside the region”. 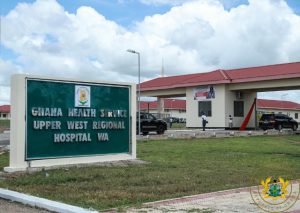 Consequently, the accumulated pressure mounted by the people of the Upper West Region for the facility to be commissioned and to pave way for its operationalization and usage to help reduce needless deaths and cost of referrals of patients outside the region for healthcare; among others forced the President to commission the hospital on August 18, 2019.  During the commissioning, the President stated that “this project had passed through the hands of four successive presidents of Ghana. According to him, it was initiated and begun under the His Excellency John Agyekum Kufuor, it was continued by his successor, His Excellency the late John Evans Atta-Mills, and his successor, His Excellency John Dramani Mahama and it had been commissioned by me. This is a good statement about our country, our institutions, and our governance the President said”. This goes to confirm that the project had taken too long to be completed and therefore fulfilled its vision and mission of enhancing and promoting the health status of the people of the UW region.

Unfortunately, the euphoria that heralded the commissioning of the facility by the people of the region has vanished into thin air as the people are left disappointed for government’s inability to operationalize the hospital soon following its commissioning.  The believe and thinking of the citizenry was that government was only buying time in its commissioning and working behind the scene with the project contractor to fix all the necessary equipment and also hire the needed man power to ensure the full operationalization of the facility after its inauguration. The president reiterated the thinking of the citizenry when he told the public during the commissioning of the facility that it was “equipped with modern medical equipment, key among them included X-Ray machines (stationed & mobile), CT Scan, mammography, ultrasound, fully equipped operating theatres, medical gases and Patient Monitors; and also fitted with a complete Local Area Network integrated with a Data Centre, Hospital Information Management Systems (HIMS), Computerized Maintenance Management System (CMMS) and Internet Connectivity”. He further mentioned that the hospital was designed with several departments including “an administration, Out-Patient-Department (OPD), Physiotherapy unit, Pharmacy, Radiology Unit, Laboratory, Surgical Suite (Operation Dep.), Emergency & Casualty Unit, Burns Unit, Central Sterile Supply Department, Medical Gases production unit, Obstetrics & Gynecology (Maternity and Child Health), Ambulance Station, Mortuary, Medical Waste Department, Relatives Hostel and 20 no. Staff Housing Units.

However, prior to the commissioning of the hospital and after the street protest organized by the NDC to put pressure on government to operationalize the hospital, the then Director-General of the Ghana Health Service Dr. Anthony Nsiah-Asare broke his silence on the regional hospital to Mugabe Maase; host of Inside Politics on Power 97.9 FM on 28th June 2019, that “the facility filled with modern equipment was undergoing its last phase of medical and laboratory testing ahead of its opening later this year”.  According to him, “the testing and calibration of the equipment which would ensure the safety of health workers and clients was necessary since they would also assure the functionality of the medical devices. That “as I am talking to you now a team was at the Wa Regional hospital. He further stated that “the facility was undergoing its last testing, including testing of the sewage system, gas and all other equipment”.  He also added “that a group of persons who will be working at the facility were being trained to effectively work with the equipment to deliver quality health care to the people and that the hospital was one of the hospitals that will be operationalized soon after the inspection was done”. This was after the Akufo-Addo government had come under intense criticism for missing all the deadlines to operationalize the health facility in the early part of 2019.

ATAG, believed that governance largely was about creating the needed environment to enhance and promote the better conditions of its citizens through putting in place well-coordinated plans, programmes and projects. Unfortunately, on this part of our world, governance was reduced to firefighting, propaganda and lies; where nothing was well planned and implemented. Consequently, ATAG is never surprised to see citizens rise up in arms through positive defiance, organizing press conferences, and demonstrations to register their displeasure across the country before their basic needs like water, schools, hospitals, roads, electricity among others were provided by governments. 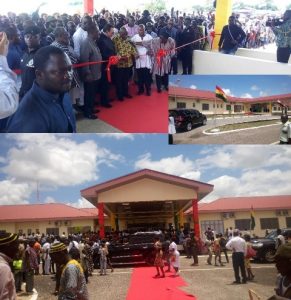