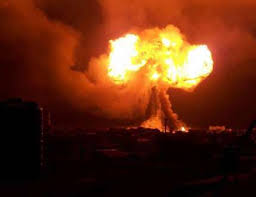 There is a fire outbreak at Odorkor Bussia near Rev. Owusu Bempah’s church this night. Ghanapubliceye.com reports.

The fire that started around 10:30 pm on the 12th of March 2017 night has actually destroyed a lot of properties belonging to the settlers and some shops along the street. Some of the shops that got burnt were some boutiques, phone shops, cosmetics shops, vulcanizing shop and some other businesses around.

As at the time this reporter got there, Ghana National Fire Service were not yet there to protect lives and properties even though there had been a lot of calls made into their offices. It took them more than an hour before the Fire Service responded.

A settler who gave her name as Auntie Ama told this reporter that, the fire started from a wooden structure where some boys occupy. According to her, ECG personals came to disconnect their electricity power but still, those boys managed to do an illegal connection by tapping into the main line to their wooden structure, she believes the fire started as a result of that. She added, that is where all the area boys come to charge their Phones and so she is not surprised they are the cause of this disaster.