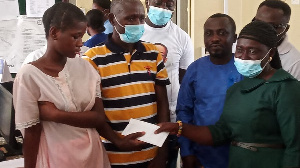 Erica Younayel, a fourteen (14) year old JHS 2 student who received brain tumor treatment at the Komfo Anokye Teaching Hospital and had been detained for inability to pay hospital bills, has finally been discharged thanks to Emmanuel Addo.

The young female patient who is student of the Krobo Junior High School in the Afigya Kwabre South District of Ashanti Region had been detained for almost one and a half months, according to reports. This in turn got her parents stranded and helpless, thus after their inability to raise the 5,000 cedis bill.
Smiles were however put on their faces after Emmanuel Addo came to her rescue.

Members of Emmanuel Addo Fan Club, an Afigya Kwabre South-based organization presented the money on behalf of Emmanuel Addo.
It was revealed that the help came in after a UK-based Emmanuel Addo, the Founder and President of the Fan Club got the news of the sad incident.

Dr. Karikari Simon, who led the group to do the presentation on behalf of Emmanuel Addo explained that Emmanuel Addo had the unfortunate information about the girl from the headmistress of her school through Krobo executives and the women organizer of the Fan Club that, the girl from their own consistency had been detained at the hospital for more than one month, due to her parent’s inability to pay her bills after she had received brain tumor treatment. 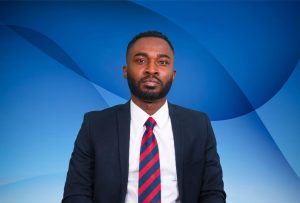 According to him, after Mr. Emmanuel Addo, the President of the Club who is not in the country was informed – he took it upon himself to funds the bills and other items worth over ¢5,000 for the girl who had been detained for one and half months and presented some items to all patients in the ward.
Mr. Yuonayel Anthony, the father of the girl expressed his profound gratitude to Emmanuel Addo for the timely intervention which gave him and his family a great sigh of relief. He however urged them to continue with the good works.

The father, after sighing a great relief shared an ordeal over how some known well-to-do personalities within the Afigya Kwabre South Constituency ignored him after he had called on them for assurance.
“I called one popular and a wealthy man I don’t want to mention his name. He sadly snubbed me when I called him for assistance over my daughter’s ailment. He told me point blank he was not ready to help me, and after that, he hung up the call. We had lost all hopes until Emmanuel Addo came to rescue us. We’re most grateful to them,” he said.

He pleaded with other corporate and civil organizations to emulate the good example set by the Emmanuel Addo Fan Club to help put smiles on the faces of other families and individuals who may be in need.
Finally, Ms. Miranda Melody Boadiwaa, the Principal Nursing Officer (PNO) at the D2A Ear, Nose, and Throat (ENT) department, speaking on behalf of the family and the hospital commended the Emmanuel Addo for the kind gesture done to the family of Yuonayel . She urged them to keep up the good work in serving mankind, especially the less privileged and the needy ones in the society.