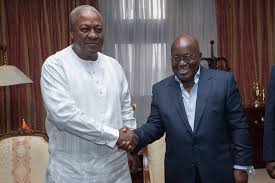 If I want to be a Smart politician, I will join NPP

These two options always strike me anytime I monitor social media most especially Facebook.
I have followed closely posts from political communicators from both sides of the two major parties in the country.

I have activated a first see option for almost all the news makers from the two parties on Facebook.
It takes me a minute or less if my internet is active to see posts from the president of the Republic, the former president, kojo Oppong Nkrumah, the information ministry, okudzeto Ablakwa, and a host of others.

This function enhance my appreciation of political discourse while I then narrow my ears and eyes to the foot soldiers who are final carriers of the message to the ordinary undecided voter.

Most often than not, based on my own observations, NPP communicators always sustain an argument till its later conclusion whereas folks in the NDC may easily hang it on a tree waiting for the next wind of big story in their favour to sweep it away.

The NDC communicator until the emergence of Sammy Gyamfi can hardly match an NPP communicator. Even then, as Sammy chases the top gangs running gasping for breath, the moment his presence on the national front fades his followers struggle to sustain his efforts.

A clear example of the recent press conference held by Sammy inside the dried 1V1D projects all ended the moment the young lawyer flew back to Accra.

An NPP communicator at that critical moment is looking for his leader’s achievements to splash on social media to defuse or counter the cogent point made by the national communications officer of the NDC. The moment the banter is between a national figure of the NDC and a foot soldier of the NPP, you should clearly note that the national executive of the NPP is gathering bullets to face it off with MPs of the NDC.

This mismatch in profiling personalities in debate makes it very easy for the NPP to always bulldoze their way through even the most complicated issues.

What necessitated this piece is the fact that the former president John Mahama after suggesting very concrete options to government for consideration, left all that on his Facebook page awaiting Sammy Gyamfi to make noise about it.

He suggested among other things that “These measures may include temporary tariffs reliefs in respect of utilities”. (John Mahama Facebook post April 3, 2020).

Rather sadly, the arguments been advanced by NDC communicators to deflate or convince the public was this populist slogan of “nothing is free”.
If they had read a statement from their own leader, they would’ve made a stronger case of projecting the former president as a leader with foresight.

Political communication I must admit is a full course on it’s own but some basics of reading from your own stalwarts should set the tone for any individual desiring to fearlessly defend his party and leader.

In this little observation, I hope to urge that political parties take interest in training their frontlines with some basic tips.

I don’t need a University of Havard degree to know that the next move of a political opponent can only be obtained from listening and reading from them other than hailing your own political leader.

The NPP in my candid view always plays smart while the NDC would always want people to feel their emotions. You win an argument with FACTS and Smart alternatives not Emotions.

This is my observation
Fred Duhoe