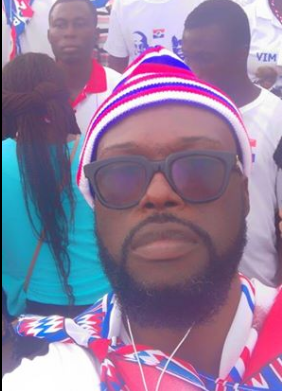 The ﹰMercy ﹰLokko ﹰhitmaker C-Zar has posted a statement which insinuates he has a problem with the way the current rulling party the New Patriotic NPP is manning the affairs of the country.

The hip life artist who was one of the staunch supporters of the then opposition leader Nana Addo Dankwa Akuffo Addo to be come the President of Ghana from 2008 through to 2016 seems to be not happy with this Government.

According to a statement he posted on his official Facebook page today, he said, “SORRY TO SAY TO NPP THAT I CAN NOT COMPOSE THE CAMPAIGN SONG AGAIN

STILL WITH THE PARTY BUT I THINK OF GHANA FIRST”

STILL WITH THE PARTY BUT I THINK OF GHANA FIRST”

What instigated this post is not still known because he had since last year shown interest of doing a campaign song for the NPP party come 2020 so for him to make a U turn is still baffling his comrades in the party. 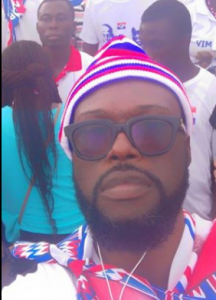 According to him, he thinks about Ghana First and that any party interest can wait.

People had suggested that, maybe the hip life artist was expecting more than he is seeing from this Government hence his statement. For him to be patriotic to his country and his party at large, He wouldn’t want to claim all is well knowing things are not going on well as promised by this Government .

Don’t forget he still affirms his loyalty to the party. 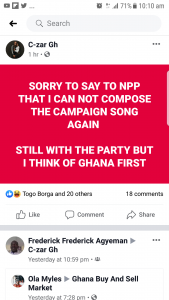