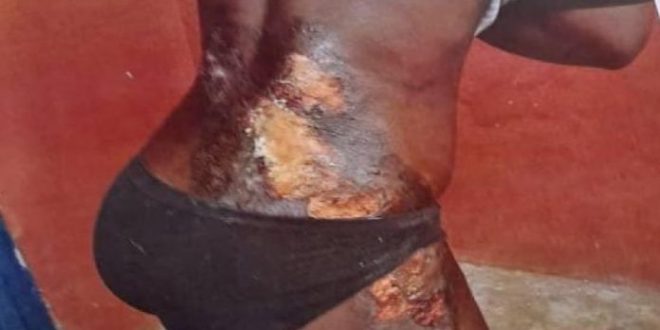 A 41-year-old trader has been put before an Accra Circuit Court for allegedly pouring hot water on her 16-year-old daughter whom she accused of stealing GH¢5.00 to purchase food without her consent.

The Court presided over by Mrs. Christina Cann admitted Rahinatu to bail in the sum of GH¢80,000 with three sureties, two to be justified. The matter has been adjourned to October 18.

Prosecution said accused however cautioned the victim not to enter her room because the victim had stolen GH¢5.00 to buy food without her consent.

Chief Inspector Atimbire said the victim then went to sweep their compound.

According to the Prosecutor, the accused who was then preparing hot water for the victim’s siblings, poured some of the hot water on the victim.

Prosecution said the victim sustained severe burns on her back and buttocks.

The victim went to inform her Aunt and a report was made at the Domestic Violence and Victims Support Unit of the Ghana Police service at Nima and a medical form was issued to the victim to seek medical attention.

“In accused caution statement, she admitted the offence,” the Prosecutor.

One Teacher, One Laptop Programme Is Nothing But Theft – NDC’s TEIN

Dead Body Found In A Sewer In Manya Krobo